More than 123,000 individuals are on the national waiting list in need of an organ transplant. Thousands more are in need of tissue and cornea. For the Center for Organ Recovery & Education (CORE), narrowing those numbers—and dispelling damaging myths and misconceptions about organ donation—has proved to be a steep challenge.

Enter Elias/Savion.
To educate the public about organ donation and, increase the number of registered organ donors, Elias/Savion set to create a concise, memorable campaign that exemplifies how important it is to become an organ donor.

LiVE:8 was chosen as a campaign name that highlights the eye-opening statistic that every registered organ donor has the potential to save eight peoples’ lives.

Elias/Savion continues to build off the success of the original campaign, most notably in a TV spot titled, “Say Yes,” which was designed and produced to invoke emotions surrounding the importance of LiVE:8’s messaging.

LiVE: 8 did an incredible job of reaching CORE’s target audience, with a total reach of 5.2 million people. Never before in CORE’s history have they seen such momentum and continuity with the conversation about organ donation. LiVE:8 began and continued an important conversation regarding organ donation and the importance of signing up to become a donor. 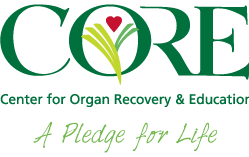